In its claim to Dunnes on behalf of the workers, Mandate cited the increased cost of living and the positive contribution of staff to the business during the pandemic and since as the basis for its claim for a fairer system of pay and conditions.

The creation of one pay scale In Dunnes is particularly important because, currently, there are multiple pay scales in the company where some workers are on higher wages than others for doing the exact same job. Mandate wants to harmonise the pay and benefits for all Dunnes workers but the union wants to ensure pay equality is done in a way that brings the lowest earners up to the top.

An additional item on the income front being proposed by Mandate and the Dunnes workers is the ending of the €1,000 limit on the staff discount card.

In addition to rates of pay and the creation of one scale, Dunnes Stores workers have proposed other matters in the pay claim.

Chief amongst them is the issue of the allocation of hours and proper staffing ratios. Many Dunnes workers want to work longer hours because they can’t pay their bills, but the company won’t allow them, choosing to either understaff stores, which leads to huge pressure on staff, which in turn leads to health and safety concerns, or else they hire more workers on lower rates of pay.

The workers and Mandate are also seeking changes to the sick pay scheme – especially given that the country is still in the midst of a pandemic. Dunnes workers and tens of thousands of other shop workers risked their lives and their health over the last two years and the least they should get is a decent sick pay scheme – an eight week paid sick pay scheme and all staff should have access to this after their six month probation.

Another key item on the Dunnes workers’ pay claim is fully paid maternity and paternity leave. If workers don’t have enough income when on maternity or paternity leave, not only do they suffer, but their children suffer too. Dunnes workers are also seeking more flexibility when taking Parental Leave to enable workers to take it as separate days or weeks.

Finally, Dunnes workers are looking for their management to recognise and respect their workers’ right to individual and collective representation by their trade union.

Background to the Claim

The pay claim has been formed following extensive consultation with Dunnes workers, including a survey of more than 1600 staff.

Some of the key results include: 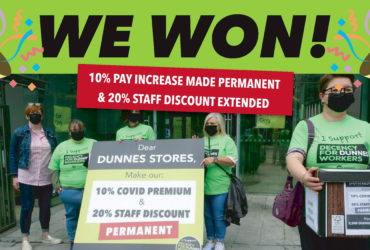 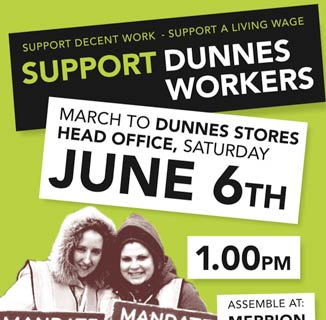 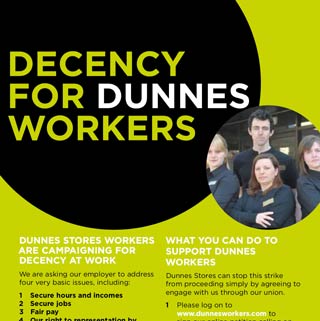 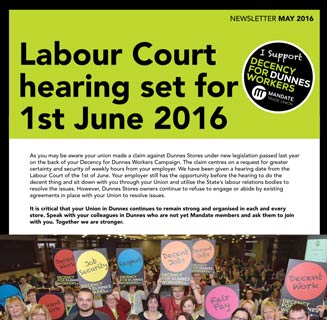