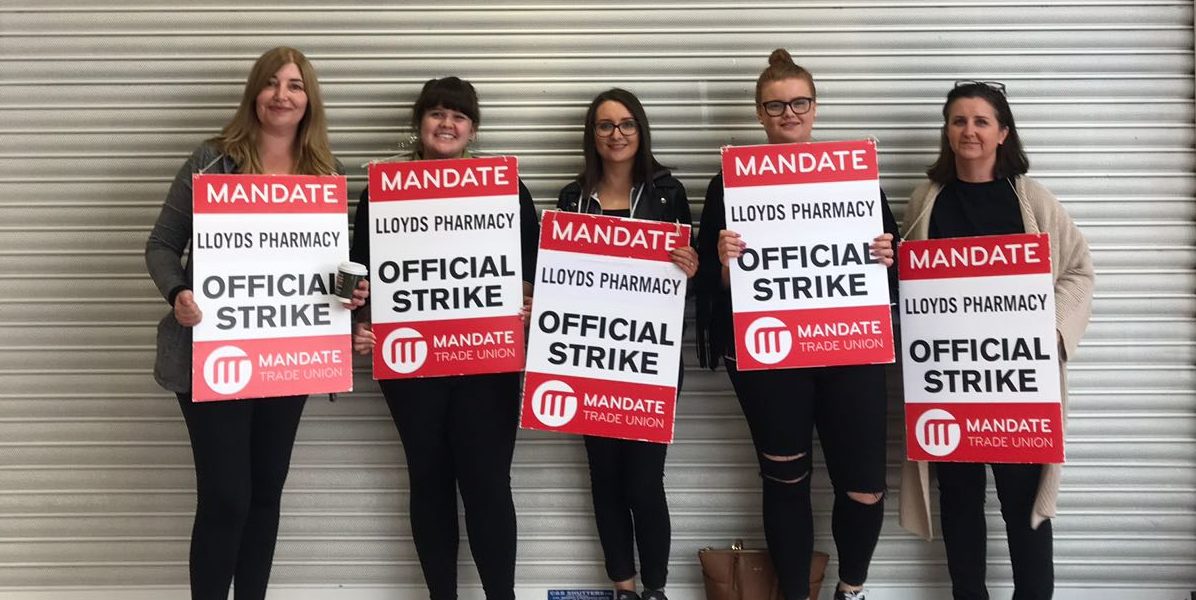 Workers apologise for any inconvenience, but say company is to blame

Mandate Trade Union is warning the public that at least six Lloyds Pharmacy outlets will be closed for the next two days (Monday, 3rd & Tuesday, 4th September), while up to 30 more stores will be impacted by a strike as workers escalate their campaign for decent work and fair pay.

The closed stores include: Tonlegee and Coolock in Dublin 5, Killester in Dublin 3, Crumlin in Dublin 12, Neilstown in Dublin 22 and Mullingar, Co. Westmeath. The company has not yet confirmed other closures but others may be expected.

More than 30 additional Lloyds Pharmacy stores (full list below) will also have official pickets placed outside them and the workers are asking for understanding and support from the public.

The Union said it is regretable and disappointing that senior management have forced their workers into striking.

“The decision to strike is a very difficult one for our members and is a very last resort. They have tried in every possible way to have their right to trade union representation affirmed, but management have frustrated them at every opportunity.”

He said: “Lloyds Pharmacy management have refused to accept a Labour Court recommendation which instructed them to negotiate with Mandate Trade Union.

“The Minister for Business has backed the workers and the Seanad has unanimously backed the workers in their claim for trade union representation. When your company ignores this, you are left with only one other avenue to have your rights recognised, and that is to participate in industrial action.”

Mandate Trade Union, which represents 270 staff, or 35 percent of the workforce within Lloyds Pharmacy’s retail operations, say this strike can easily be resolved by Lloyds Pharmacy management if they simply agree to meaningful negotiations with their workers’ representatives.

Mr Light concluded: “If members of the public need medication while this dispute is ongoing, they may wish to move their prescriptions to another pharmacy.”

The strike relates to a claim by Mandate Trade Union which includes:

Dates for future strikes include:

Locations on strike include:

LloydsPharmacy is Ireland’s largest pharmaceutical chain operating 88 stores across the country with approximately 800 workers employed in their pharmacies.

LloydsPharmacy is owned by the McKesson Corporation which is the largest pharmaceutical company in the world with revenues of €183.88 billion in 2017 – more than double the revenue of the Irish state.

McKesson also own UDG Healthcare (formerly United Drug) which is headquartered in Ireland, and where the workers are afforded their right to trade union representation (SIPTU and Unite represent staff in Ireland).