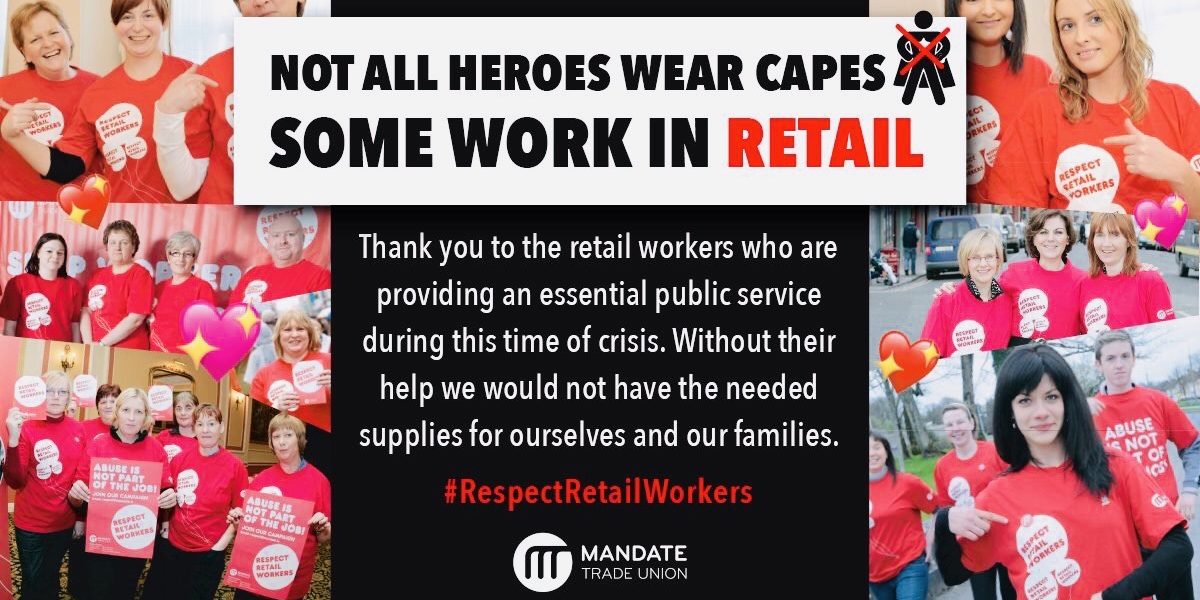 The Covid19 pandemic hit hard and fast and many workers including those working in shops were expected to ensure the country functioned to the best of its ability. Shop workers, for their part, ensured everyone had food on the table and in doing so, they put their health at risk.

In recent days it has emerged that retail workers were hardest hit by the second and third waves of the pandemic making up 6pc of all cases.

Some retail workers contracted Covid19 and died, many others became seriously ill with the virus and even now many are experiencing the impacts of Long Covid (Post Covid Syndrome).

For those sacrifices, they deserve our sincere appreciation.

There is a responsibility for both the government and employers to recognise the sacrifices made by shop workers, and by their families who were also at risk due to the exposure of the worker to the virus. That recognition should not be tokenistic and should have a meaningful legacy.

Shop workers were deemed essential workers during the pandemic, yet they are among the lowest paid in the economy.

Mandate Trade Union is calling on the government to give proper recognition to shop workers by ensuring any monetary bonus or otherwise is extended to them along with other essential frontline workers.

Mandate is also calling on employers to ensure their shop workers are rewarded for the sacrifices made during the pandemic through improved terms and conditions of employment, including adequate pay increases.

One possibility for a Covid19 Pandemic Recognition Payment is the government could open up a scheme that’s self-declared but can be audited. Workers would be required to complete an application form for the payment which would then be signed by their employer. The technicalities of whatever scheme is developed should be negotiated between unions and government.

Many of our essential workers who were on the front lines during the pandemic, including shop workers, are still not afforded the right to collectively bargain. Those workers are not only subject to low pay, they are also subject to precarious work including: flexibility in hours; short roster notice periods; an inability to seek more hours when available; and a lack of pension coverage to provide for workers in retirement.

The government should immediately implement collective bargaining legislation and allow access for trade unions so that workers can win permanent improvements to working conditions for workers who put themselves in harm’s way during the pandemic.

The majority of shop workers do not have access to private health care and are dependent on a functioning public health system. The government should immediately prioritise the full implementation of Slaintecare and adequate investment in the public health system so workers on low pay and not subject to a second tier health system. This would be reward for private sector workers, but would also be a reward for the heroes who are currently working in our overcrowded and under resourced hospitals. Further, stronger focus should be directed to mental health services which are badly needed for workers in shops who have reported increases in abuse at work in recent years.

Irish workers have among the lowest number of public holidays in the EU. Mandate believes all workers should benefit from an increase in public holidays and this is not necessarily a reward for frontline workers during the pandemic. However, any new public holiday should be named in honour of those who put themselves and their families at risk so that the country could continue to function.