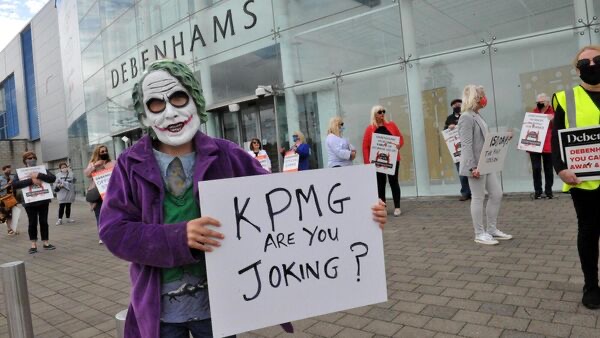 Mandate Trade Union General Secretary, Gerry Light, today condemned the actions of Debenhams liquidators, KPMG, regarding the removal of stock from the Debenhams Blanchardstown location in the early hours of this morning whilst under the cover of darkness.

Mr Light said, “As late as yesterday I wrote requesting that KPMG or any of its agents should desist from attempting to remove stock from any Debenhams location on the basis that it was clearly in contravention of existing Covid-19 regulations in that it could not reasonably be considered to be essential work. Frankly, this pre-emptive decision to forcibly remove stock in a covert operation with the Gardaí defies belief, especially on the very same day the Ex-Debenhams National Shop Steward Group were planning to meet with representatives from Solas and the Department of Education to further discuss the €3m fund that has been made available by the Taoiseach and his government.”

Mandate only received formal notice early this morning of KPMG‘s intentions to clear stock. This notice from the liquidators was issued via an email to Mandate’s solicitors just prior to midnight last night with the obvious intention of keeping the union uninformed of their plans at Blanchardstown.

Light continued, “Our members are understandably upset and very angry, especially considering the provocative timing of this early morning operation and the clandestine nature of it. Therefore, we totally condemn the actions of KPMG in Blanchardstown last night in the strongest possible terms. Mandate will attend our scheduled meeting with Solas and the Department as planned this morning and will consult with our members to consider next steps thereafter.”