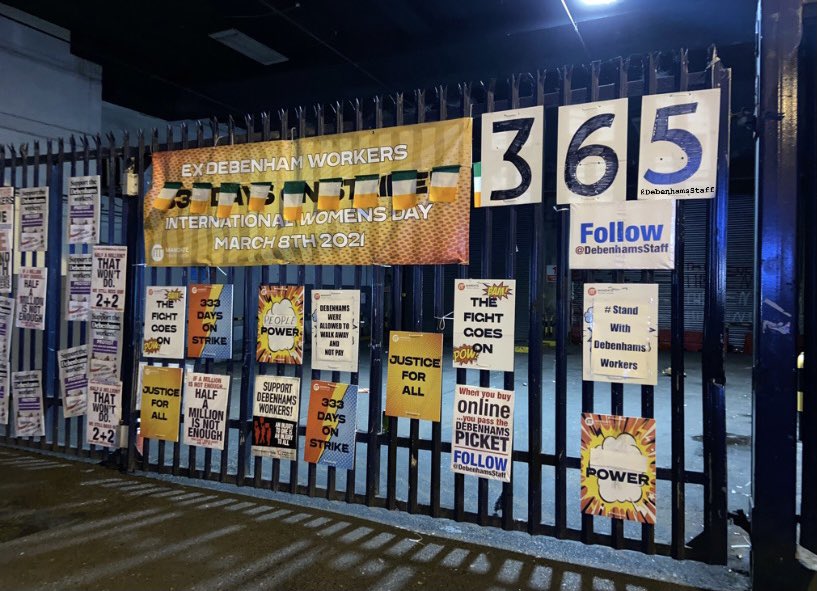 Mandate members who previously worked in Debenhams in the Republic of Ireland have today (Friday, 9th April) marked one year since they were made redundant by their company, leading to a 365 day dispute.

Almost 1,000 workers in 11 stores balloted for industrial action in an attempt to win their agreed redundancy package of four weeks pay per year of service. Since then, the liquidator of Debenhams, KPMG, and the Government have both refused to honour that agreement.

Brian Forbes, Mandate National Coordinator said the union was extremely disappointed the ex-Debenhams workers have been forced to strike for so long:

“These workers should not have had to go on strike for a single day. They had an agreement, their employer was allowed walk away from that agreement, which was wrong, but the liquidator and the government had an obligation to step in, and they didn’t.”

“I want to applaud the workers for their tenacity and for their commitment to the principle of justice. Since they began this strike they’ve been clear that not only are they doing this for themselves, they are doing it so that no other worker has to go through the same trauma they had to endure.”

He added: “This dispute will leave a historical legacy. It shows that you have to struggle to achieve any meaningful change in this country.”

Mr Forbes said that the trade union movement is calling on the government to immediately implement the recommendations of the Duffy/Cahill report which was published in March 2016.

“When this dispute started, we had no expectation that we would be here one full year later. I am proud of the stance we took and how we have highlighted the unfairness of the current legislation that’s supposed to protect workers. We want to thank the public and everyone who has supported us and we are once again calling on the government to do the right thing and implement Duffy/Cahill immediately.”

“It is time for all workers in retail and trade unions across Ireland to stand up and support the strike and to fight for the implementation of the Duffy/Cahill report so that workers no longer have to go through these disputes.”

The locations of the striking stores include: