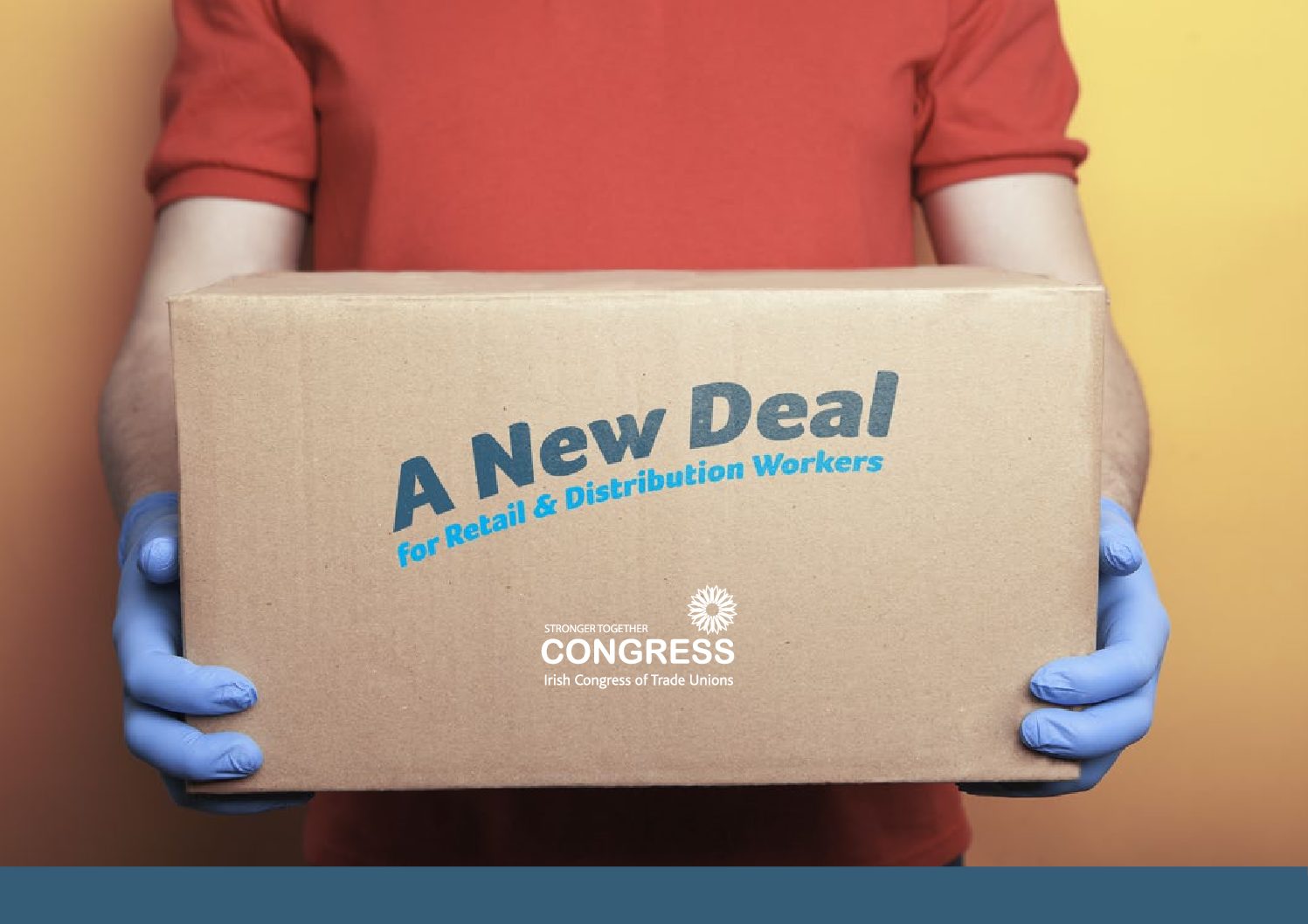 Retail & Distribution workers are demanding a ‘new deal’ that will tackle low pay and insecure work and help rebuild the sector after the Covid 19 pandemic, as part of a campaign launched by trade unions representing workers across sector.

A New Deal for Retail & Distribution Workers (see below) sets out the key measures needed to restore and rebuild the sector after the pandemic, by tackling the serious issues around low pay, working conditions and poor job quality that were exposed by the health emergency.

The campaign is backed by the Irish Congress of Trade Unions’ Retail Sector Group, which comprises unions representing workers in Retail & Distribution across the island of Ireland, including: Mandate, SIPTU, Unite, USDAW and the GMB.

A New Deal for Retail & Distribution Workers calls for the establishment of a Retail Stakeholder Group composed of trade unions, retail employers and key government departments that would be tasked with devising a new blueprint for the Retail & Distribution sector to help it recover after the pandemic.

The campaign document states that workers in the sector can “no longer afford the price of the low pay and insecure work” and that a new deal must embrace Decent Work standards as a key priority, including improved pay and conditions, trade union representation and collective bargaining, along with access to training and upskilling.

Rebuilding the sector post-pandemic and ensuring fair competition between online trading and the traditional ‘bricks and mortar’ high street model will require significant financial and policy assistance from the Government, according to the document.

Trade unions and workers must play ‘an integral role’ in developing a new blueprint  and ‘future-proofed model’ for the retail and distribution sector. Given the essential roles played by Retail & Distribution workers during the pandemic, there is a strong desire for progressive change to employment standards within the sector.

Workers will not support “a return to business as usual and to the old, failed model,” the campaign document points out.

The Congress Retail Sector Group has called on all political parties to support the New Deal for Retail & Distribution Workers campaign and proposals and is seeking an urgent engagement on these key issues with Minister of State Damien English TD, who has responsibility for the retail sector.

Speaking in support of the campaign, Mandate General Secretary Gerry Light said: “The pandemic exposed how essential service workers in Retail & Distribution are among the lowest paid and least well protected. This must change and this demand  for change is supported by the workers, by a range of expert bodies and commentators and by political leaders. Indeed, it is an issue the Tánaiste Leo Varadkar, TD has also been vocal on. The time for promises is past. Now is the time to act and to deliver a New Deal for workers in the sector.”

Michelle Quinn of SIPTU said: “The Retail & Distribution sector faces enormous challenges into the future. We now have an opportunity to break with the failed model of the past and build a sector that delivers quality jobs and growth. We need to address challenges like online trading, automation and the range of new skills the future workplace will require. To do this successfully we need the voice, knowledge and commitment of workers to help shape and inform a new blueprint for this vital sector of our economy.”

A New Deal for Retail & Distribution Workers can be downloaded here: