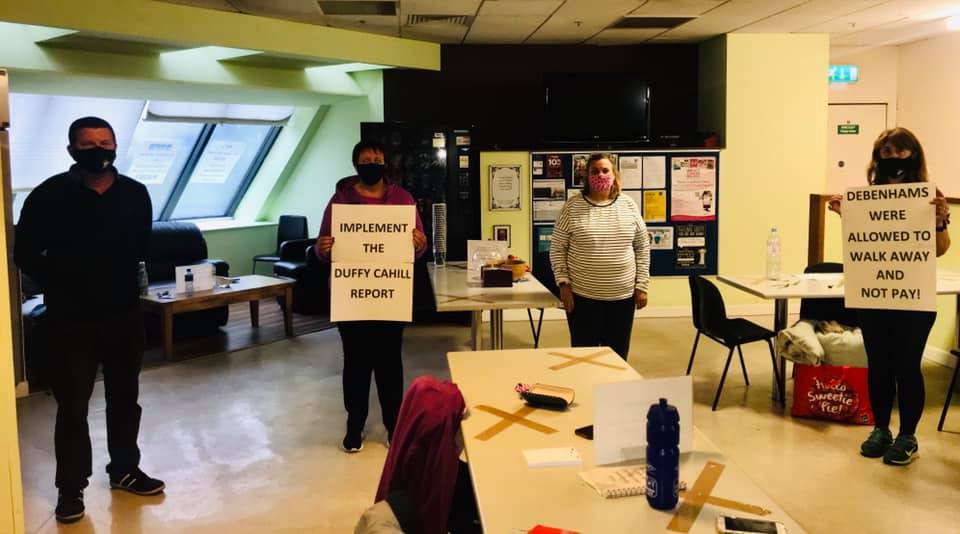 Mandate says government refusal to legislate has led to occupations

Mandate National Coordinator Jonathan Hogan said the liquidator, KPMG, escalated the dispute last week by sending in individuals to pass official picket lines to pack stock in preparation for removal and this antagonised the workers who have been on strike for 172 days.

Mr Hogan said: “Last week we wrote to KPMG seeking clarification of their position, regarding calls from the Taoiseach, Tanaiste and almost every other elected political representative. Instead of meeting this request positively, the liquidator hired workers to pack up stock and prepare it for removal. If it is the case that they don’t see themselves having any future role in finding a resolution to this protracted dispute then it falls to the government to act, and act now.

“To further compound the frustration for our members,” he added, “ TDs from government parties signed a pledge saying they’d support our calls for a political solution to this strike, yet the Government then went and blocked Joan Collins TDs motion in the Dail which provided all the solutions necessary. Talk about mixed messages.”

Mandate believes the only viable solution to this dispute now is through new legislation which contains provisions to allow workers whose employer hasn’t yet completed the liquidation process to avail of collectively agreed redundancy packages.

Mr Hogan says if this is not done, it could lead to a further escalation in this dispute.

“We completely understand the frustration and anger our members are feeling. They’ve been left high and dry by their employer, then by the liquidator and now by the government. Had the government implemented the Duffy/Cahill review back when it was presented to them, there would never have been a strike and the workers would have their agreed redundancy package. Unfortunately they are still refusing to implement these vital changes which is an affront to our members who are months picketing their stores.”

Mr Hogan concluded: “Mandate is calling on all TDs to sign a pledge which could resolve the dispute if implemented through a Private Members Bill. We need Fianna Fail, Fine Gael and the Green Party to cease offering words of sympathy and instead draft legislation to resolve this immediately. If they don’t do that, any further escalation lies firmly on their shoulders.”

“I pledge to support legislation that will