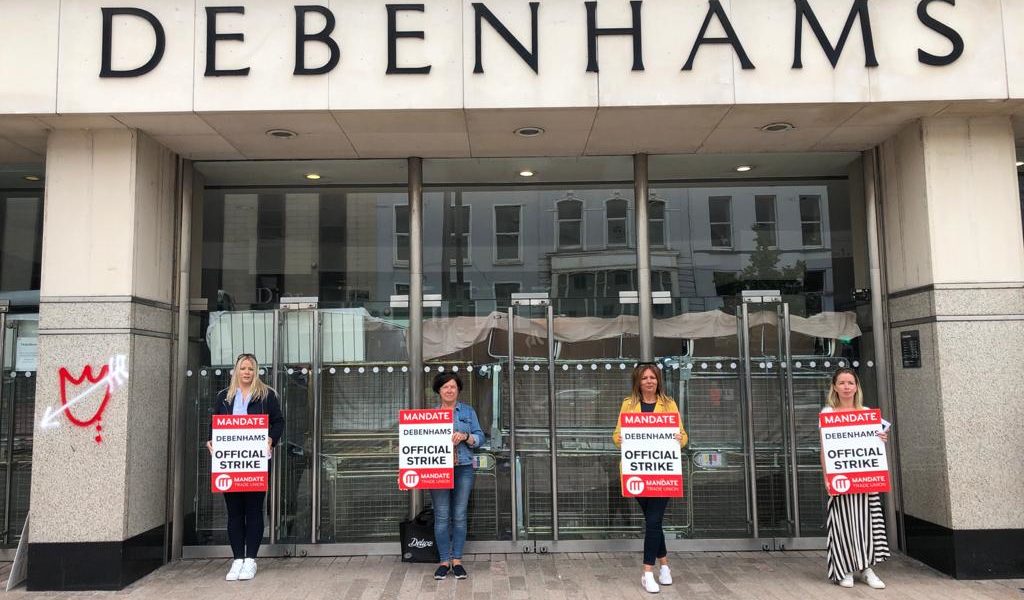 Mandate Trade Union has negotiated a potential resolution to the Debenhams dispute as the workers near 150 days on strike following an announcement that the company would enter liquidation in April.

Full details of the finalised deal will be made available to the workers early next week ahead of a national information meeting and a subsequent ballot of Debenhams members.

The protracted and complex nature of a very difficult set of negotiations has resulted in a potential settlement offer which is expected to include a financial settlement offer as well as guaranteed employment for a number of Debenhams staff as a new leaseholder takes control of at least three stores.

Mandate Trade Union had negotiated a redundancy package for Debenhams staff in 2016 which included four weeks pay per year of service. However, when the company entered liquidation earlier this year, there were no assets to pay their 1,000 staff leaving them with statutory redundancy of 2 weeks pay per year of service. Since then the workers have balloted for and engaged in industrial action.

Gerry Light, Mandate General Secretary said: “This deal was only made possible because of the resilience and determination of our Debenhams members who have stood on picket lines through hail, rain and even storms over the last four months. They have lobbied, protested and raised consciousness of their plight through the media. They are a credit to their union and to themselves.”

Light explained that the workers should never have been put into this position.

“We have met with government representatives and have received assurances from them that they will give serious consideration to the early implementation of new legislation along the lines of the recommendations of the Duffy/Cahill report which was produced by the last government as a solution to the Clerys dispute which had many similarities.”

He said, “We’ve seen it time and time again where employers walk away from their responsibilities and leave the state picking up the tab when they enter liquidation. Enough is enough. We need to see meaningful political action and changes to legislation immediately.”

One proposal contained in the Duffy/Cahill report and backed by the Irish Congress of Trade Unions contains a provision to recognise trade union negotiated redundancy packages.

In a letter to Minister Damien English, Patricia King, ICTU General Secretary, explained that this should be funded through a special levy from Employers

“We have examined best practice in these matters operating in European countries such as Germany, France and Austria all of whom have established Levy Funds on Private Sector employers, for such purposes, with contribution rates ranging from 0.66% to 0.35%,” said King.

“We believe that such a mechanism should be put in place here, without further delay.”

She added, “It is our view that this would be the most reasonable and fair approach in these circumstances to ensure that the full terms of workers collectively agreed contracts can be honoured in full and that workers would never find themselves in similar circumstances in the future.”

Light concluded: “As always, the resolution to this dispute is down to our members. Next week they will receive the full proposal and have the opportunity to ballot on it. Until then I want to recognise and praise them for the hard work and the sacrifices they have endured in getting us to this position.

“However,” he added, “this isn’t over yet. We continue to need strong picket lines so I am urging all Debenhams members to maintain the pickets and all other Mandate members to give them support in whatever ways they can. If Debenhams workers win and manage to change legislation, everyone will benefit so I hope the wider trade union movement can rally behind them.”