Collective Rights of Workers Must be Protected

YOUR right as a worker to become a member of a trade union is enshrined in the Irish Constitution, so you might be forgiven for believing this bestows rights that allow you to have that union represent and collectively bargain on your behalf – but, alas, not so.

Irish law does not give workers the collective right to have their union negotiate on their behalf. It’s akin to being allowed join a golf club, but not being allowed to play golf.

If workers desire to have their union negotiate terms and conditions of employment, they often have to forcibly convince their employer of this course of action. But more and more employers are unwilling to engage, leaving workers with little option but to take to the picket line to win what is essentially a basic human right.

Indeed many major employers, many of whom are in retail, have idealist corporate social responsibility policies covering their own supply chains declaring the rights of workers in their supply chain to join and be represented by free trade unions, but when it comes nearer to home they will deny these basic rights to their own workers.

Why are employers and employers’ organisations (employers’ unions) so afraid of workers getting a collective union voice at work? The answer is simple: they fear workers uniting and fighting for decency and respect.

Employers want to remain the sole arbitrators of wages, of benefits, of hiring and firing. It’s about control, it’s about bullying and intimidation – essentially it’s about keeping workers in their place.

The irony of the situation is that employers are members of their own unions (employers’ organisations) such as IBEC, SFA and ISME. These employer organisations give employers a voice about work, about their sector and effectively lobby authorities on matters of importance to employers.

The Government has deliberately failed Irish workers. They have never introduced or proposed adequate legislation to protect workers’ rights to organise and collectively bargain, and instead they have introduced weak and ineffective legislation which continues to give control to employers and forces workers to struggle for what is a basic human right.

The result of this imbalance of power between capital (employers) and labour (workers) is that hundreds of thousands of workers are consigned to work in lower-paid, precarious jobs, fearful of organising and without any rights.

The share of productivity and profits produced by workers has been dwindling and the share going to investors and management has been steadily increasing. Ireland now has one of the highest proportion of lower-paid jobs as a proportion of total employment of all EU countries. We are second only to the United States in this regard.

In the Nordic countries and Germany – where collective bargaining and a voice at work are commonplace – workers earn more wages, enjoy more leave and are treated more fairly than their counterparts in Ireland.

And here lies the nub of the issue – employers here fight to keep workers out of unions and forming collective bargaining because it gives them a bigger share of the pie. They are fully aware that a voice at work leads to better conditions of employment.

The trade union movement can no longer fight with one hand tied behind our back. We will no longer accept that employers and employers’ organisations hold all the cards. We are demanding equal rights and protection for workers and their unions.

We demand legislation to give effect to this equality, we demand a Trade Union Act which gives workers legal protection to organise and to have their union collectively bargain on their behalf.

The general election early next year will present the trade union movement with the opportunity to highlight and campaign across all political parties for this basic demand. 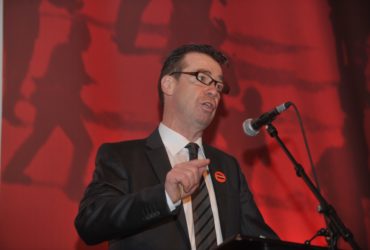 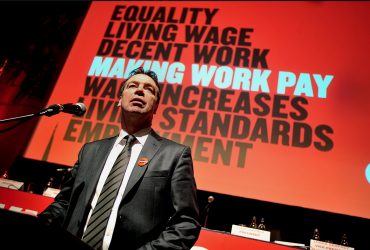