Mandate members, retail staff and workers in the low paid sectors of the economy are impacted more than most by the housing and homelessness emergency that has gripped the nation for far too long.

The problem is, some politicians see low paid workers as collateral damage in their ideological commitment to facilitating a housing system based on greed and speculation.

There are now 10,305 people homeless across Ireland. That number of homeless families has increased by 268% since March 2015, while almost 4,000 children are currently in emergency accomodation.

These numbers, however, do not include ‘hidden homelessness’, people who are living in squats or ‘couch surfing’ with friends. Women and children staying in domestic violence refuges are also not included in these homeless emergency accommodation counts and the figure also does not include people who are sleeping rough – which is almost 200 in Dublin alone. 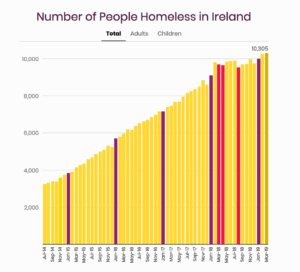 Growth in homelessness in Ireland since 2014

They say “the true measure of any society can be found in how it treats its most vulnerable members.”

Since 2014 Mandate Trade Union has condemned the inaction of successive governments in dealing with our housing and homelessness emergency. People are literally dying on the streets, and yet they continue their failed policies.

They refuse to build public housing. They refuse to stop economic evictions. They watch like voyeurs as international vulture funds buy up houses and apartment blocks all over Ireland, bragging about how they make more profits in Ireland than anywhere else in their portfolio of misery.

Many people seem to think that this housing emergency doesn’t impact on them or their families. Parents with 35 year old children still living with them cannot join the dots. People paying extortionate rents of €2,000 per month believe there is no alternative. The inability of people to realise that this housing emergency effects everone and that there is an alternative is how the government get away with it.

For instance, last year we spent approximately €1 billion on rent assistance (HAP, RAS, etc) which went directly into the hands of landlords. That much needed money would’ve been better spent on our crumbling healthcare system or on building approximately 5,000 public housing units.

As rents go up and house prices increase, workers have less money to spend in the local economy, including the retail and bar industries. This puts pressure on businesses, often meaning the cutting of hours or attacks on hard won terms conditions of employment.

A well resourced national home building plan would help Ireland to balance the economy, remove many people from the disasterous poverty situations they find themselves in, and end homelessness, while also reducing social housing waiting lists.

It won’t be delivered, however, without the public making their position known to all political parties.

The homelessness and housing emergency we are currently experiencing is the result of political choices. The priority of landlords over tenants. The preference of developers over home owners. The choice of vulture funds over the homeless. There is plenty of money for overspends in the new childrens hospital. Plenty of money to hand over to friends of the government for a national broadband rollout. But no money for building public housing?

We must hold the parties that caused this crisis to account. We can start this Saturday, 18th May at the Raise the Roof rally where we can show politicians in no uncertain terms that we will no longer be their collateral damage and that we are going to force an immediate change in housing policy.

Mandate members are asked to assemble at Head Office, 9 Cavendish Row, Dublin 1 at 1pm. The rally will have entertainment from Damien Dempsey, Frances Black and Paddy Casey.